The river is not white but reddish brown 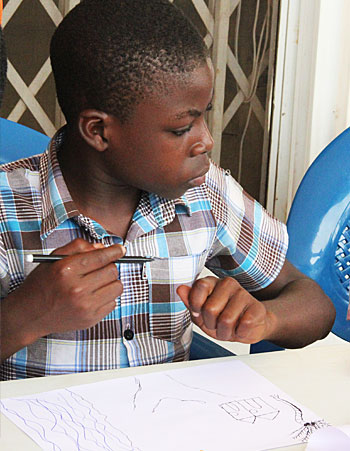 I have very nice memories of the school trip that Auntie Moniek had organized. It started on my birthday and the whole house was decorated.

I was in the exam year of Junior High and there was no holiday for the exam classes. Auntie Moniek spoke to the headmaster and said we would learn a lot along the way. Then he gave his permission.

We slept in hotels and ate there as well. It was so crazy that I didn't have to take care of the food, but that it was served. It felt very uncomfortable, but also nice.

We also visited a farm where handicapped people live. At first, I thought it was a bit scary but after a while we just played with them. The last day we went to a swimming pool. After that I had to go back immediately because the next day, I had to go to school again.

Emmanuel was 15 years old when he wrote this.