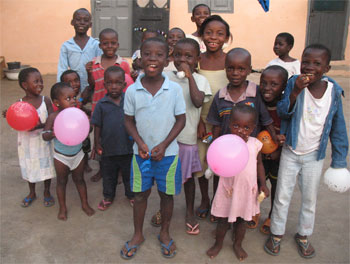 Oyoko is a small village in the New-Juaben Municipal District, in the Eastern Region of Ghana, about 4 km from the regional capital Koforidua*. Based on data from 2000, Oyoko has 6400 inhabitants of which 30% are children between 6 and 18 years old. Most inhabitants live from agriculture, only a few work in the public sector. About 70% of the population in Oyoko are Asantes. The most spoken local language in Oyoko is Akan (Twi). English is the working language in Ghana. Near Oyoko are the holy mountain Obuo Tabri, the Volta lake with the Akosombo Dam, the Akan Falls and Boti Falls and the Umbrella Rock. In Oyoko there is an annual average of 125 to 300 cm of precipitation at a temperature between 20 and 32 degrees Celsius.

* According to oral tradition, Koforidua owes its name to an Akan man Kofi Ofori, who had built his hut under an enormous mahogany tree. This tree provided shelter to tired farmers who returned from their land after a hard day's work. After a while it became common for the farmers to say that they would rest under Kofi Ofori's tree. In Akan (Twi) the word for tree is "dua". An amalgamation of the name and the tree of Kofi Ofori therefore becomes 'Koforidua'. Ladies from Koforidua are popularly known as Koforidua Flowers.